The tradition of service continues........

This transition  has significant history . Phil Jeffries Sr. and his brother David both got their start in funeral service in the late 1930's working for Sank's grandfather at  his Tamaqua funeral home  while they  were in high school. David bought his funeral home in Centre Hall, PA after WW II and Phil Sr. opened his first funeral home in Coaldale, PA in 1950.

Our Ginkgo tree in Autumn gold color. Planted around 1880 when the building was built by the Blakslee family as their home. This tree is a large male Ginkgo and one of the larger, older Ginkgos in the state. 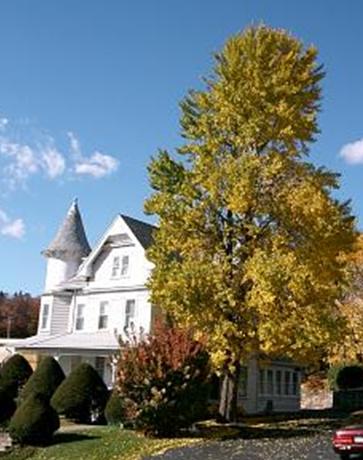 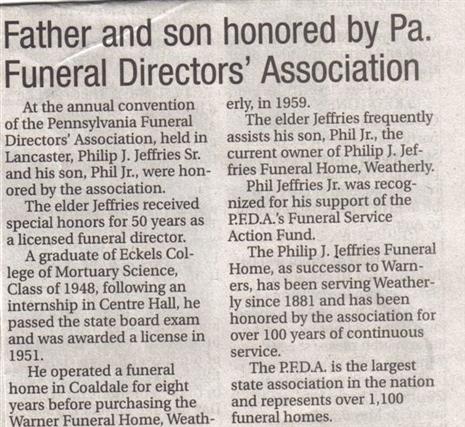 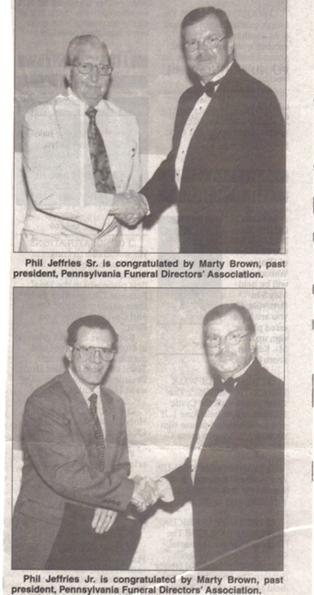 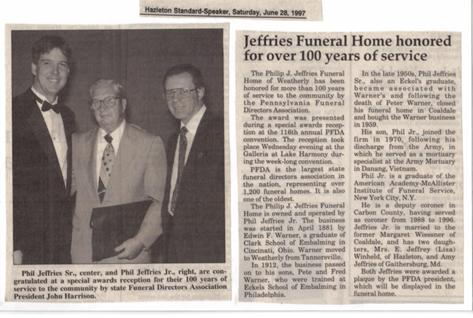 In the early 1920's the Warner's purchased the Blakeslee residence at 211 First St. (across the street) this became the funeral home. The Furniture business continued at 208 First St. until 1985 when Phil Jeffries Jr. closed the store and sold the building.

In 1957 the funeral home was remodeled. A new chapel was added with additional seating for up to 80 people. Also added was a preparation room which was and is still state of the art. The newly remodeled funeral home was the first building in Weatherly with central air conditioning.

In 1959 Philip Jeffries Sr., a graduate of Eckels School of Embalming, closed his funeral home in Coaldale, PA and bought the furniture store & funeral home from Peter Warner's widow. His son Philip Jr. at 15 was just starting to assist him. Phil Jr. obtained his license in 1967 after study at Penn State and the Americam Academy McAllister Institute of Funeral Service in New York, NY. He served his internship at Trexler Funeral Home Allentown, PA from 1966 to 1967. Immediately after passing his State Board exam in 1967, Phil Jr. enlisted in the US Army. He served in Vietnam where he was one of the original GI embalmers at the Danang Mortuary. He also served as an instructor at the Mortuary Affairs School at Ft. Lee, VA. Phil Jr. returned to Weatherly after his service to assist his father in the family business until Phil Sr. and his wife Maxine retired in 1985 and their son purchased the Funeral Home.

Phil Jr. served 2 terms as Carbon County Coroner and is currently a Deputy Coroner. He also was a Field Study Embalming Preceptor for the Funeral Service Program at Northampton Community College.

E.F. Warner attended both Sullivan Schools of Embalming held at Hazleton, PA in March & November of 1887. With his son Peter, he also attended the Clark School visiting Hazleton in 1897 and it's successor, the Cincinnati School in 1902. Peter Warner also attended the Eckels School of Embalming in Philadelphia when it first opened in the early 1900's. 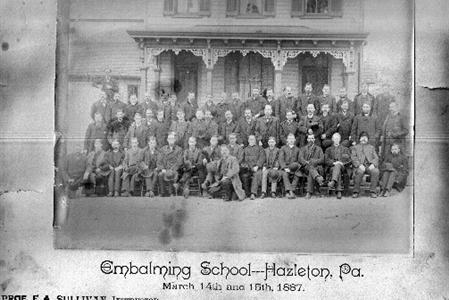 The business was founded at Weatherly, PA in 1881 by Edwin F. Warner and first operated in the Gilbert House. In 1886 the business was moved to a new building at 208 First St. This building housed the Warner Undertaking and Furniture Business. The Warner family resided at 210 First St. which was attached to the building. In the early 1920's Warner purchased the Blakeslee residence across the street where the funeral home is currently located. 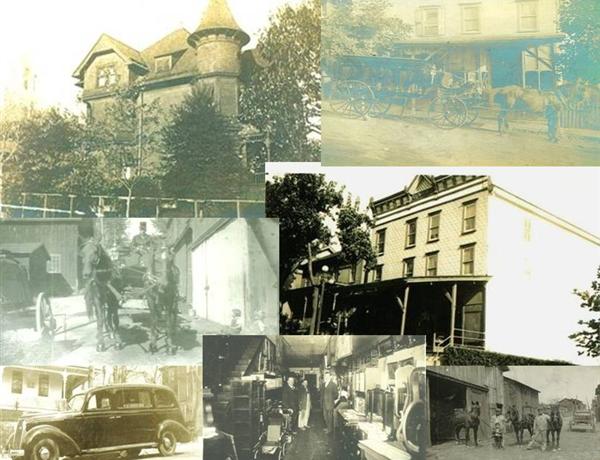